Here is my first foray into Stop Motion! This is a viral ad that I did with Director Evan Rudin. He is also an LA local, with lots of friends and family in common, so it was a real treat to do a small spot with a group of LA Natives for a local LA jeans company – Paige Premium Denim! The video was featured on the GQ Style page (http://www.gq.com/style/blogs/the-gq-eye/2012/08/watch-this-paige-denim-gets-updated-stitch-x-stitch.html).

The shoot was a 2 day ordeal where we were in the conference room of Paige Denim with our White Cyc set-up and a Canon 5D connected to my laptop running DragonFrame software. We started with different pieces of jeans and literally took them apart stitch by stitch so that we could then play them in reverse to create the illusion of the jeans coming together. Talk about a laborious process! The biggest challenge was trying to keep the fabric on the edge of the stitching as still as possible so that the jeans wouldn’t be wiggling all over the place in a distracting way. I think it came together very nicely. Final color was done at Prehistoric Digital.

I’m way behind on the blog here, but I had to post this for the fact that the Kings won the Cup. They DID NOT Finish Second! 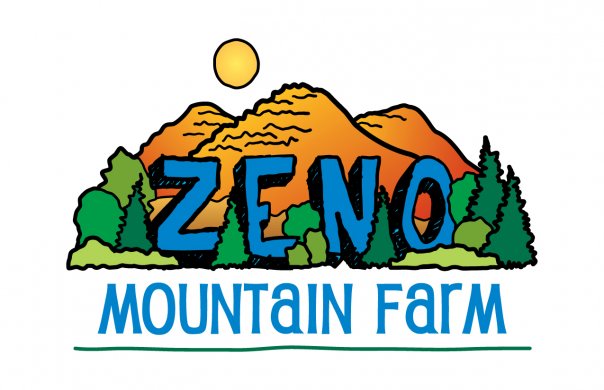 I had the unique opportunity to work on a short film called “Bulletproof Jackson” for the camp Zeno Mountain Farm a few days over the last two weeks.  It was one of those things that I had no idea what it would be like when director Peter Lazarus had asked me about my interest in shooting a couple days of a Western for a special needs camp, but I told him it sounded like a great cause and I’d do it if I happened to be available.  And when the time came around to shoot, I was available – and I am so glad that I was.  Zeno Mountain Farm is a camp in Vermont for people of all ages and a wide range of disabilities.  Every year they make a trip to Venice to shoot a short film to let the campers have an experience acting and putting together a short film.  In years previous Pete and camp director Will Halby shared most of the filmmaking duties, but this year they decided to pull all the stops and add some production value to the shoot, and that is where I came in.  Things were pretty vague as Pete and I started to prep and scout for the Western portion of the movie which they were bringing me on to shoot.  We scouted a place called Pioneertown for our Western bar and town location which happens to be a little ways out of LA near Joshua Tree.  It was a fantastic location, and I would find out more about how we would use it as we were still waiting on the script. 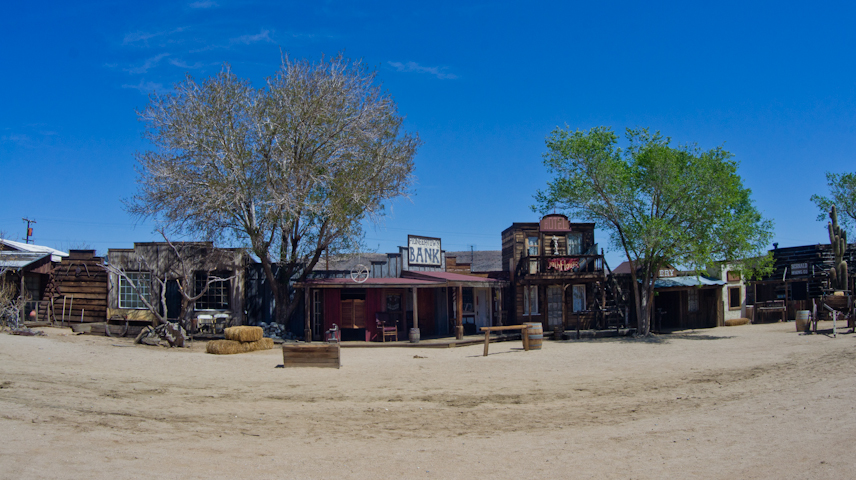 It wasn’t until a few days later that I received the script. It was about a young man who own a bar that belonged to his great great great grandfather Bulletproof Jackson – and his ownership is threatened by a professional poker player who wants to turn the bar into a casino.  The story flashes back and forth between the creation of the legend of “Bulletproof Jackson” and his great great great grandson who is trying to make sure he holds onto the family legacy of the bar.  The script initially struck me as rather ambitious – especially as I knew that the budget was barebones and finding crew to trek all the way out to Pioneertown was going to be difficult.  Thankfully most of the Western portion took place in the old saloon, I was able to get equipment through Leonetti Company and was joined by camera assistant extrordinaire Stephen Taylor Wehr (Detention of the Dead, Drones).

While most of my concerns were based on the limited size of our production team (i.e. me and Stephen), many of them started to be relieved as I sat in on the read through of the script at the Zeno Venice headquarters.  From that very gathering I knew that this was going to be a special experience that I would not regret for a moment, no matter what the challenges would be.  The way that these films work is that they are cast with both campers (with disabilities ranging from Downsyndrome to Cerebralpalsy to Aspergers) and councilors (who were a mix of actors and models and artists).  It was pretty special to see these people get to partake in the making of a movie that wasn’t about their disability – it was just a MOVIE and they were the cast!  I cannot fully express how cool the experience was.  It was stressful at times because I was trying to get as much production value as possible – so I was running around hanging points, placing lights and running distro.  Not to mention controlling the look and camera operating.  All the while there was a 7 man HBO Documentary crew shooting a doc on the camp and their movie!  With help from another DP friend of Will’s we were able to get all the work done that we needed to out in Pioneertown and all that was left for me to help shoot was the final modern day poker game and the final shootout the following week.  All of the actors did a great job, and even added some hysterical improv to round out their roles.  The real backbones of this Western shoot were Jeremy Vest who played Bulletproof Jackson and a fellow named Zach who played his nemesis Grimm (Zach also played the role of the modern day card shark). 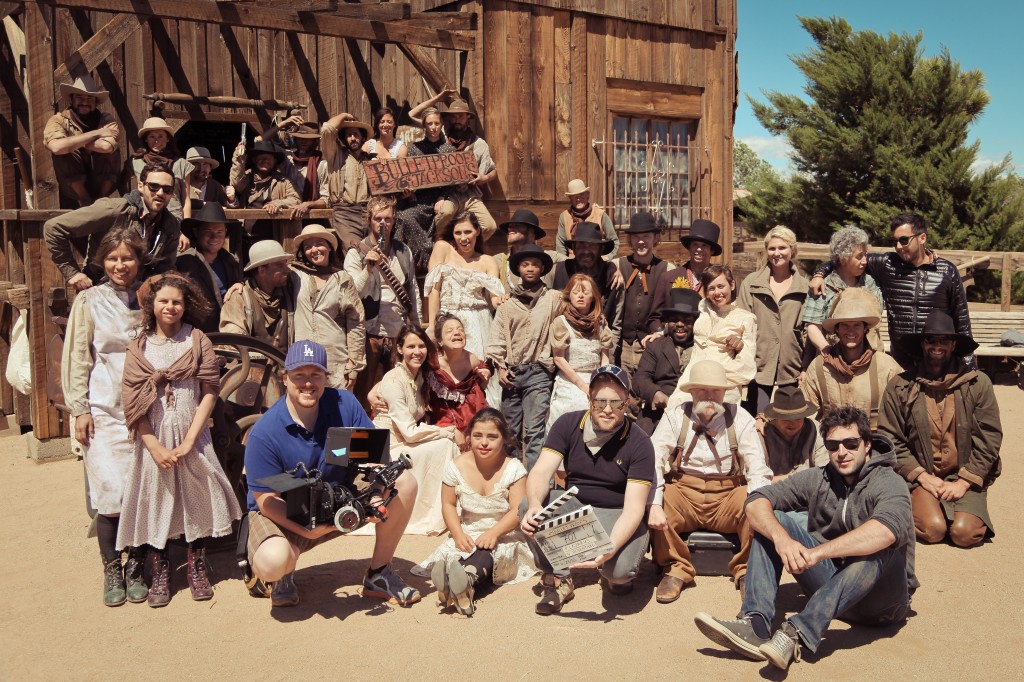 My portion of the shoot finished with getting a chance to play with the new(ish) Canon C300 with my Olympus Primes at 60FPS for the final modern day poker and Western shootout scenes which were being intercut. In an industry that is so inherently selfish as the entertainment industry, it felt so good to be a part of something with a larger humanitarian goal while still getting to practice my craft.  The merging of those two things was extremely rewarding.  I know that I am going to be looking forward to working on another short with this group next year, though we might have to bring in a little bit more pre-production and structure!  I’m proud of all the work that the campers did, continually impressing me with their ability to stay focused and involved.  I also got to meet some Middlebury College Alums who are involved with the camp – such a small world. 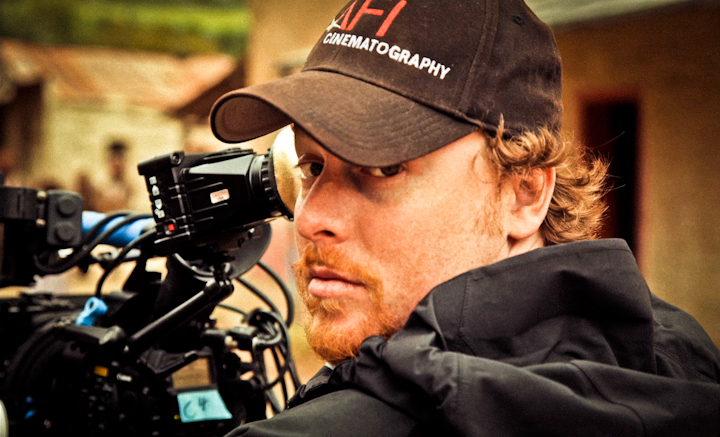 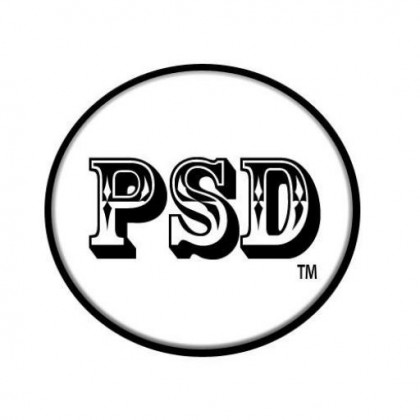 When the second feature that I shot (“Occupied”) screened at The Lone Star International Film Festival, director Mollie Binkley did an interview with Gadi Elkon with the Dallas based entertainment BLOG Pearl Snap Discount. He was very responsive to my work in the film, especially the Lens Baby stuff, so when he found out that “Fat Kid Rules the World” was premiering in his home state at SXSW, he reached out to do an interview with me.  It was a really great opportunity to discuss all of the projects that I have been involved with and my own career path as it has been shaping up.  It is a two part interview – a written interview done before SXSW and an audio interview after I got back:

Written Interview: Looking Through the Lens with Cinematographer Noah Rosenthal 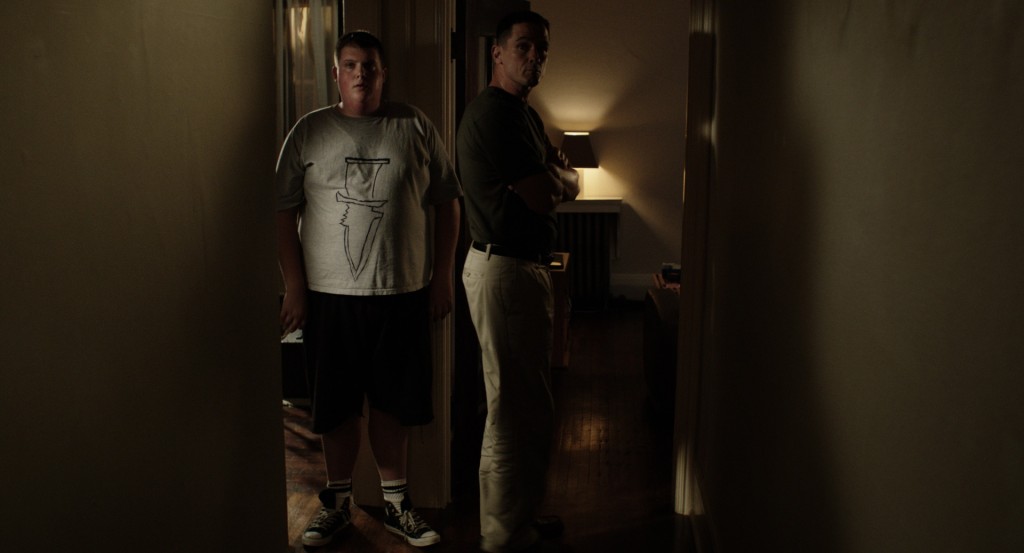 You never know what you will come across while location scouting!

I’m very excited to share the review that Fat Kid Rules the World got in Variety this week. It is so awesome to see the vastly positive response that the film has gotten from audiences, media and reviewers. It also doesn’t hurt to get a little personal shout out from the trades:

It was a real privilege to shoot in Seattle over the summer. I had such a blast. Got to shut down streets. Light up buildings downtown at night. And lets not forget all the fantastic places to eat, drink and be merry. It is why I love location shooting. You get to visit a new city and see a lot of its high points in the short time you are there. Plus, when you have time to go back and visit or are lucky enough to shoot in that same place again – you get to see all the wonderful people you met and worked with the last time. I hope that I’m lucky enough to continue exploring new and exciting places while I’m shooting. Where will the next movie be??? 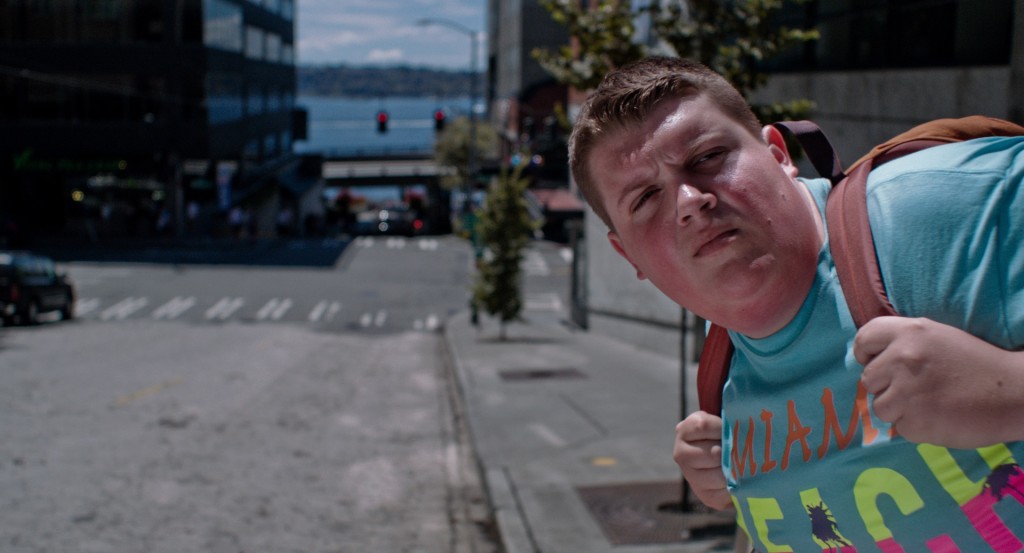 I finally have a complete version of the short film “Blink” that I shot in Vancouver a couple of years ago.

Recently it played at AFI Fest which was a very cool experience considering that my Dad (who Directed) and I are both AFI Alums.

Check it out if you have a chance – got to do a bunch of fun Lens Baby work on this one!

Screenings will be on April 27th and May 2nd.

This will be the third film I have had screen at this festival following “The MisInventions of Milo Weatherby” and “Conception”.  I’m really excited about this film getting out into the world.  It has been such a crowd pleaser beyond just the hardcore zombie fans.  I hope to be down there for the Premiere! 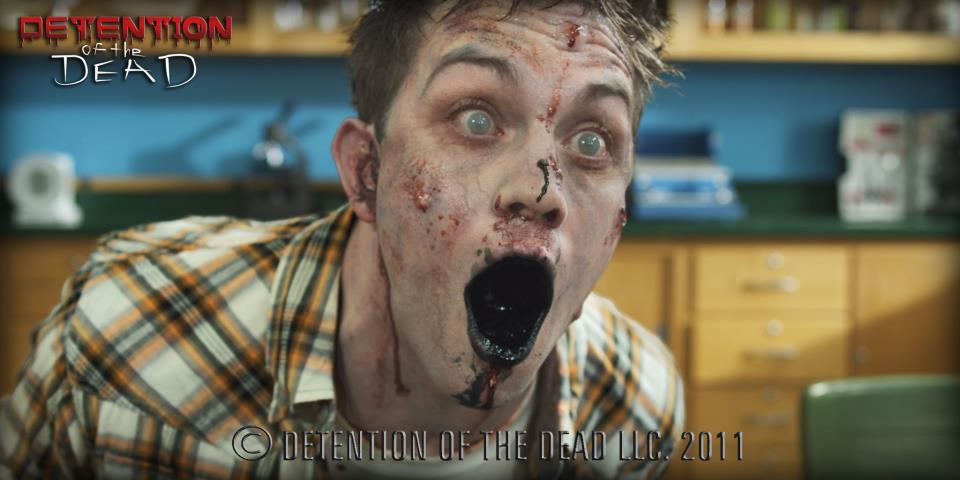 Mark’s not feeling too well… 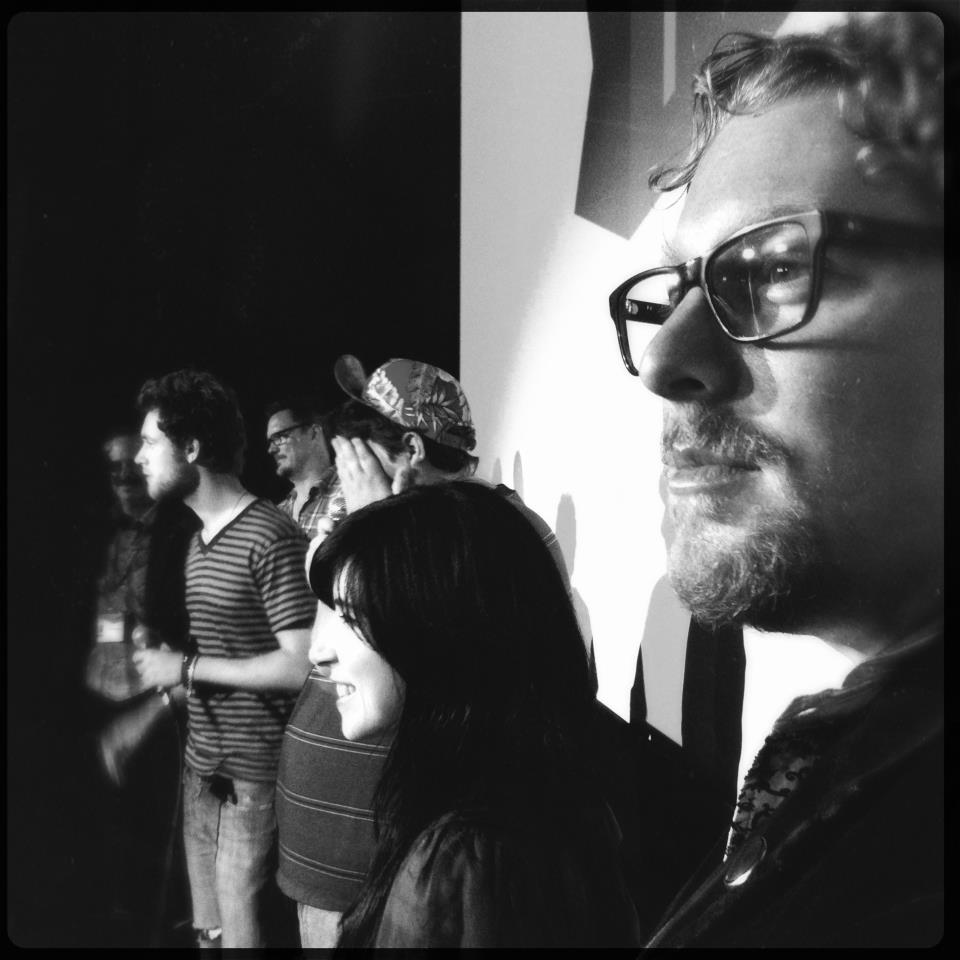 Reviews are coming in:
“Fat Kid Rules the World has a refreshingly distinct visual style. Unlike many films, where light floods the screen and images are given a well-lit, sometimes flat, base to work with, filmmaker Matthew Lillard’s debut feature instead revels in the depths of the shadows created when you go for a more natural light feel. A simple shot of Troy on his bed, for example, is given so much more weight (no pun intended) when the shadows are allowed to define his countenance. It also gels with that punk aesthetic that the film is trying to instill in its main character.”

BBQ was consumed in Lockhart, TX 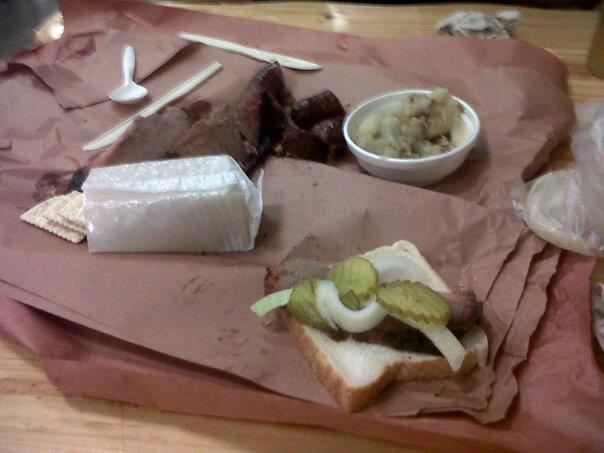 Detention of the Dead Trailer