It is pretty neat how the entertainment industry can work sometimes – and this summer I had the amazing opportunity to collaborate with Catherine Dent on her short film “Silk” for the AFI Directing Workshop for Women.  While I was in grad school at AFI, Catherine was nice enough to grace us with her amazing acting chops on my Thesis Film “{sanctuary}”.  I had a wonderful time working with her then, and she must have had a good enough time working with me, because when it came time for her to direct a piece I was lucky enough to get a call!  The script was really interesting because in many ways it is a re-invention of Film Noir. It follows a middle aged woman, Rani, who is trapped in a loveless marriage, as she is confronted with a random opportunity to free herself from her situation. It is a morally ambiguous world that also touches on the subject of child brides, so there is more at work here than just entertainment – a social message without being preachy.

Catherine has this wonderful ability to get people excited about things, so we were very lucky to have a team that spanned experience and age – but was always overflowing with enthusiasm. Highlights for me were getting to work with her, as well as the incredible Shohreh Aghdashloo in the leading role of Rani and David Hayball as my Gaffer (with whom Catherine worked on The Shield).  We were also lucky to have our entire camera package DONATED by Panavision Woodland Hills (thanks to David Dodson and Alexa Lopez) and G&E interns from Larry Parker’s Mole Richardson school.  Though I really wish that I could have had an experienced Key Grip, we were able to do pretty well on a tight budget over the 5 days of shooting! In fact I think we would have been GOLDEN had it not been for an unfortunately temperamental picture vehicle that didn’t like driving around much, let alone in the heat, without overheating.

Catherine really wanted to approach this movie in a naturalistic yet Noir fashion, so we were constantly looking for opportunities to interweave a bit more of that Noir style into the movie while allowing it to feel true to the life of Rani – the main character. It was a challenging line to walk, but I think we made some strong choices of when to use handheld camera work or dolly movement and let the lighting fall more into the expressionistic realm.  I think that most stories benefit from a strong visual approach to character and POV – which is what we were able to do here.  There is no confusion over who’s story this is, especially with Shohreh as the leading lady.  She is so talented that watching her through the lens during the shoot felt almost like a transcendent experience. 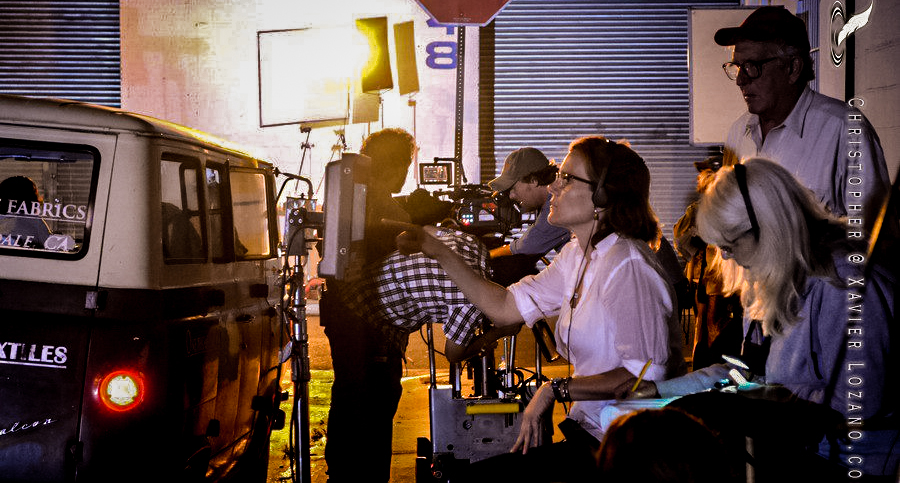 The flashback sequences were another opportunity to make a distinct visual choice – and after our discussions during prep it seemed like the Lens Baby was the tool to give us the more abstract and etherial feeling that Catherine was after for those scenes: memories that existed in that in between of reality and fantasy. We chose to do a skip bleach look on those scenes in Color Timing to move them away from warm happy memories and the more typical warmth of a middle eastern desert vibe.

The project was definitely a bit of a blast back to grad school because of a lot of factors: AFI Rules and Regulations, a young and eager crew learning on the job, a tight schedule and an even tighter budget. Wait…aside from the rules and regs not a whole lot has changed!

Catherine’s dedication and enthusiasm has seen the film through many different cuts, and the willingly donated time of so many talented industry professionals as post production is coming to a close.  We even got to do our Color Timing at Warners with Colorist Maxine Gervais who was FANTASTIC.  I am excited to see what happens for this little film – and for the screening at the DGA next summer where all the AFI DWW Shorts premiere.  It is so nice when things come full circle like this. To think that Catherine and I met on my AFI film and that I was able to be there to shoot hers makes me really happy.  Plus we got to do some really neat work together and I can’t wait to see what she does next, loaded with all the lessons and experience after her first foray into directing.

Color Timing on the lot